From Board School to Community & Meeting Centre 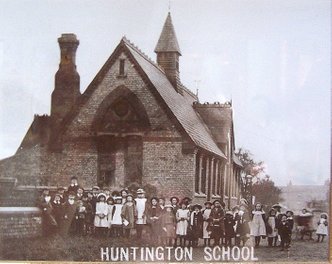 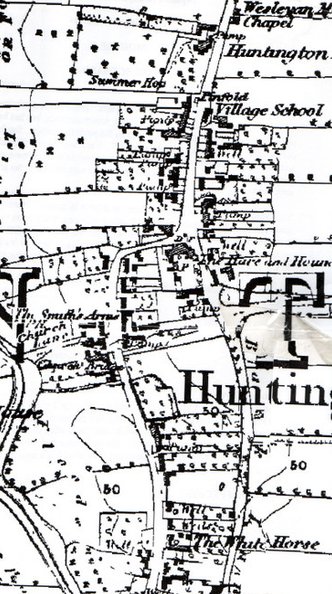 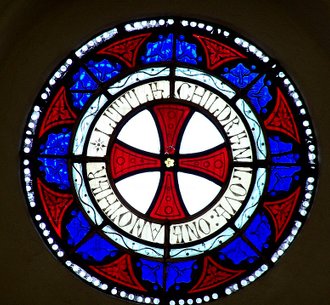 This exhortation in stained glass appears in the original classroom (now the Ryedale Room) of the Village School. The message is as relevant now as it was in 1850.

One of the earliest records of a school in Huntington is in the Archbishop’s Visitation Records of 1764. These records were a form of survey required by the Archbishops and compiled by the vicars of the parishes in England.  In the 1764 record the Parish Priest, who lived at Wigginton, records that there were 64 families in the parish and two Quakers and “there is a private school for the convenience of the children of the town…”

On a map dated 1850, showing the fields of the village probably after the many Enclosure Acts passed during the reign of George ll, there is a field marked “Village School” which appears to be in the same position as the present front rooms of the Centre.

In the Archbishop’s Visitation Records of 1865, we find that the Rev. Benjamin Metcalfe writes:

“There is a mixed Parish School, Sunday and weekday for children. I receive towards the master’s salary £4 from Lady Hewley’s Charity and £6 in subscriptions. The rest of the expense I pay myself. The daily attendance is about 24, the Sunday 14 only. The whole number of children in the parish is remarkably small but about 60 on the outside. There is also a Dame School for little children and she usually has 8 or 9. The Methodists have a Sunday School.”

There is no record of what was taught at the parish school other than the vicar “catechised the children in the weekday attendance at the school, expounding the questioning”. The population at this time is given as 671.

At the time of the next Archbishop’s Visitation, The Rev. Metcalfe is still the vicar. In 1868, he wrote:

“We have an ordinary mixed Parish School with an average attendance of 24 or 25, and a night school on Wednesday evenings – average attendance 20. With the exception of £8 subscriptions to the master’s salary, the whole of the expense, including books and repairs, borne out of my own pocket”.

This is the second time that this vicar has made a point of mentioning that he is paying for the school, largely out of his own pocket. He goes on to explain that he has established the night school on a Wednesday evening and teaches at this himself.  After an initial success, when many of the farm servants attended, the novelty wore off for the scholars . Three or four months later, attendance had dropped to just six or seven.

Huntington does not appear to have produced any schoolmasters, certainly between the years 1607 to 1883. Under the Act passed during the reign of Henry Vlll all surgeons, physicians, midwives and schoolmasters required a licence

from the Archbishop before they could practice their profession. There is no mention of anyone from Huntington being licenced  between the dates 1697 to 1883.

It was not until 1870 that elementary education was compulsory. Before that date, if you wanted to be sure your children received an education, you had to pay for it.  The idea of making education available to everybody, whether they could afford it or not, was not popular.  Many thought education unnecessary, especially for girls, and feared the loss of money which their children could be earning if they had to attend school.  When compulsory education was introduced, there existed a large number of Church schools of all denominations, which had been built in previous years by public subscriptions.  To these were added the so called ‘Board Schools’, administered by the local schools boards, which were elected bodies set up under  the Education Act.

Huntington School is typical of the many Board Schools set up at this time throughout England, each having a striking resemblance to the other.  As we look at them now, they seem to have been designed for a very limited education for working class children who, after a brief exposure to what they had to offer, would know as much as was necessary for the state of life to which they had been born into.

Huntington Board School officially opened on 11th October 1877 in a one-roomed building. By 1912, that one room had expanded to four.  Today, that first classroom is referred to as the Ryedale Room, and served education in Huntington for over a hundred years.

Post Second World War years saw much housing development in Huntington which led to an increase in school numbers to such an extent that the nearby Memorial Hall was put to use as a classroom, as it had been for a few years prior to the outbreak of war. However, school numbers continued to rise, forcing North Riding Education Authority to build a new school near the junction of New Lane and North Moor Road. This was opened in 1962.

By 1985, the Board School premises were no longer required for the education of children and were transformed into a community centre with rooms available for hire for meetings and other events.  Now a listed building, managed by a board of Trustees who give their time voluntarily, the Board School is in its third century of existence and still going strong as Huntington Community Centre.